N.B. The following text in this blog-post  St. Basil’s “Animal Prayers” are a “Hoax”  Part One is Copyright © 2012 Philip Johnson.

Much excitement has been generated over the past fifty years about two “animal prayers” which are attributed to the fourth-century Eastern Orthodox church father St. Basil of Casearea.

St. Basil is a genuine and early example of a theologian who reflected on Scripture and developed a theology of creation. Animals were undeniably of interest to St. Basil as can be seen in his series of nine sermons based on Genesis chapter one known as The Hexaemeron (translated in English in the Nicene and Post-Nicene Fathers, second series, Volume 8, St Basil: Letters and Select Works, ed. Philip Schaff & Henry Wace; Grand Rapids: Eerdmans, 1978).

However, the prayers under discussion here are not in The Hexaemeron or any other writings of St. Basil’s that are collected in the Nicene and Post-Nicene Fathers.

This is the first post in a series of seven. Each of the posts are detailed and are not for those who want brief material of less than 200 words that can be hurriedly skimmed and be half-digested in no more than three minutes.

For the sake of this blog-post I will use the titles ascribed to these two prayers which are published in Richard Newman’s anthology Bless All Thy Creatures, Lord: Prayers for Animals  (New York: Macmillan/London: Collier Macmillan, 1982, pp 19-20 & 39-40). 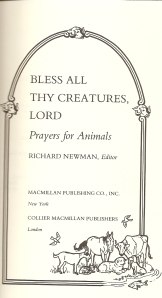 Here is the text of “Their Guileless Lives”:

For those, O Lord, the humble beasts, that bear with us the burden and heat of the day, and offer their guileless lives for the well-being of humankind; and for the wild creatures, whom Thou hast made wise, strong, and beautiful, we supplicate for them Thy great tenderness of heart, for Thou hast promised to save both man and beast, and great is Thy loving kindness, O Master, Saviour of the world.

Here is the text of “Our Brothers the Animals”:

The earth is the Lord’s and the fulness thereof. O God, enlarge within us the sense of fellowship with all living things, our brothers the animals to whom Thou gavest the earth as their home in common with us. We remember with shame that in the past we have exercised the high dominion of man with ruthless cruelty so that the voice of the earth, which should have gone up to Thee in song, has been a groan of travail. May we realize that they live not for us alone, but for themselves and for Thee and that they love the sweetness of life even as we, and serve Thee better in their place than we in ours.

It is often the case with prayers that some content will include direct use of or allusions to biblical passages. “Their Guileless Lives” alludes to Psalm 36:6 “O Lord you preserve both man and beast” (NIV), and to Psalm 69:16, “for thy lovingkindness is good: turn unto me according to thy tender mercies” (KJV).

In a similar vein, “Our Brothers the Animals” begins with Psalm 24:1 “The earth is the Lord’s, and the fulness thereof” (KJV). A further allusion in the prayer is to Romans 8:22 “For we know that the whole creation groaneth and travaileth in pain together until now” (KJV). 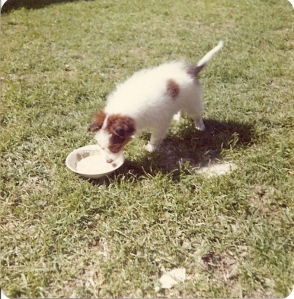 What should raise an eyebrow or two about their apparent lack of “antiquity” is the presence of very modern jargon in these prayers.

In St. Basil’s writings one routinely sees “man” and “mankind” and so it is curious that in “Their Guileless Lives” the inclusive term “humankind” is used which at the very least hints at a translator jazzing up the original text. However, this is difficult to assess on face-value because no translator is named in Newman’s book and there is no Greek or Coptic original text on which to check the translation.

Likewise, in “Our Brothers the Animals”, it is difficult to reconcile some phrases with the known writings of St. Basil. For instance, it is highly unlikely that a fourth century monk would express himself saying,  “enlarge within us the sense of fellowship” and “the high dominion of man with ruthless cruelty”. The latter sounds very much like somebody in the modern world glancing back in time in light of historical trends in the rise of pro-animal causes since 1800.

A modern author with some theological background, and who has a reflective conscience, is a more likely candidate for composing prayers like these.

Somebody forgot to ask … did St. Basil really write them?

Let me emphasise that I love these two prayers both of which express some excellent sentiments and have great inspirational value.

However, as I will demonstrate in Parts Two, Three and Four, very few people have ever bothered to ask, “did St. Basil really write them?”

For over three years I have tried to find the original sources. Most blogs and books claim that the prayers are found in either St. Basil’s writings, or that they come from The Liturgy of St. Basil (see the English translations of the Greek Orthodox version, Slavonic-Russian version, Coptic version and Ethiopian version). The trouble is that The Liturgy of St. Basil in its Greek, Slavonic-Russian, Coptic and Ethiopic versions has no prayers remotely resembling them.

After sifting through the corpus of St. Basil’s translated works, it is clear to me that neither of these prayers came from him. About the closest affinity with the above prayers is what is called the “Litany of Land, Water & Weather” that is used on occasions in The Coptic Liturgy of St Basil. In the Litany the Deacon chants:

Pray for the plants, vegetation, crops, vines, and all the fruit-bearing trees in the whole world, the winds of the heavens, the rains and the fullness of rivers with water this year. That Jesus Christ our Lord may bless them and raise them to their measure; grant a cheerful touch to the lands, support the human beings, save the cattle and forgive us our sins. (The Coptic Liturgy of St. Basil, 4th Ed. Translated by Father Tadros Malati and deacon Nabih Fanous. Arncliffe, NSW: Coptic Orthodox Sunday School, 1998, p 32 and p 92.  Available http://www.thealpha.org/index.php?option=com_jdownloads&Itemid=53&view=finish&cid=542&catid=125) 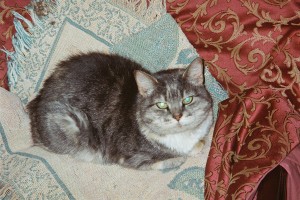 The “litany” though clearly contains nothing that approximates the two prayers attributed to St. Basil.

In the next post (Part Two) I will document how many authors (mostly academics) have claimed that these prayers were written by St. Basil. This analysis will carry on in  further posts (Part Three, Part Four and Part Five) that highlights the same problem abounds in several books and blogs written by Christians.

I will then show  (Part Six) that “Their Guileless Lives” surfaced during World War One owing to the dreadful conditions in which animals assisted in the military conflict of Europe’s “Great War”. I will also show that the original source for “Our Brothers the Animals” comes from a book of prayers composed by the liberal Baptist theologian Walter Rauschenbusch in 1910. (If you want to “cut-to-the-chase” go to Part Six here).

Lastly, there will be a summing up of lessons and reflections (Part Seven).

<end of Part One; see next post for continuation of this discussion>.