N.B. The following text in this blog-post Animals in Johannes Kepler’s Thought is Copyright © 2012 Philip Johnson. 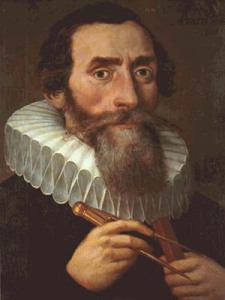 Johannes Kepler (1571-1630) was a German born mathematician and astronomer. Among his many contributions to astronomy, Kepler is well-known for formulating “three laws” of planetary motion, which gave crucial validation to the Copernican theory about the Sun as the centre of the solar system.

Kepler was also a devout Lutheran, and although his scientific labours were in mathematics and astronomy, he made some remarks about animals that deserve mention.

The rise of the current social protest movement concerning animal rights pretty much takes as its springboard the works of Richard Ryder and Peter Singer. A strong criticism has been levelled against Christianity that its teaching and practices are largely infused with an anthropocentric (i.e. almost exclusively human-centred) outlook. It is also alleged that Christianity is guilty of propagating speciesism (i.e. discriminates by favouring human interests over those of other animals).

The charge about speciesism has some validity but it does have to be modified somewhat in light of a lot of ignored evidence from church history. The other sweeping charge that Christianity is anthropocentric is always going to be susceptible to critical rebuttal because critics who are in a hurry to make a point can readily forget a fundamental point about theology: Christian teaching is theocentric.

Consider, from the Lutheran side of the Reformation, the theocentric perspective that shaped the scientific labours of Johannes Kepler. Richard Westfall (1986: 219-220) remarks:

in Kepler’s religious thought Christianity remained intact, harmoniously interwoven with his science and scarcely altered by it. His personal piety furnished the background to his work, forcing itself as it were into the printed page, as though he were unable to contain it.

This theocentric outlook of Kepler’s is very apparent in his many writings.

Kepler concluded his book on astronomy Harmonies of the World (1995: 240) with a prayer:

O Thou Who dost by the light of nature promote in us the desire for the light of grace, that by its means Thou mayest transport us into the light of glory, I give thanks to Thee, O Lord Creator, Who hast delighted me with Thy makings and in the works of Thy hand have I exulted. Behold! now, I have completed the work of my profession, having employed as much power of mind as Thou didst give to me; to the men who are going to read those demonstrations I have made manifest the glory of Thy works, as much of its infinity as the narrows of my intellect could apprehend … If I have been allured into rashness by the wonderful beauty of Thy works, or if I have loved my own glory among men, while I am advancing in the work destined for Thy glory, be gentle and merciful and pardon me; and finally deign graciously to effect that these demonstrations give way to Thy glory and the salvation of souls and nowhere be an obstacle to that.

This passage is theocentric in emphasis namely that all of creation is centred in God not man, and that creation in all facets reflects divine glory and is intended to glorify God. It also points to Kepler’s humility, his gratitude to God, and his valuing the essential priority of the gospel above even his research.

Kepler added a speculative epilogue to his book Harmonies of the World concerning a hymn about the sun that was composed by the Platonic philosopher Proclus. Kepler seeks theological meaning in the harmonious geometrical relations he discerns between the sun and planets that orbit it. He notes in passing how his own teacher and colleague Tycho Brahe (a Danish Lutheran astronomer) pondered the possibility that other worlds are inhabited. Kepler speculates that as the earth is inhabited there may similarly be creatures inhabiting the other planets in the solar system. If there are other creatures inhabiting the planets then the implication of what Kepler wrote is that they do not exist for man’s use. Kepler (1995:244-245) seeks a parallel on earth for what might be true on other worlds:

For He Who created the species which should inhabit the waters, beneath which however there is no room for the air which living things draw in; Who sent birds supported on wings into the wilderness of the air; Who gave white bears and white wolves to the snowy regions of the North, and as food for the bears the whale, and for the wolves, birds’ eggs; Who gave lions to the deserts of burning Libya and camels to the wide-spread plains of Syria, and to the lions an endurance of hunger, and to the camels an endurance of thirst: did He use up every art in the globe of the Earth so that He was unable, every goodness so that he did not wish, to adorn the other globes too with their fitting creatures, as either the long or short revolutions, or the  nearness or removal of the sun, or the variety of eccentricities or the shine or darkness of the bodies, or the properties of the figures wherewith any region is supported persuaded?

Kepler (1995: 245) breaks off his conjectures by citing the Psalms and reinforces the theocentric perspective of praising God as creator “for out of Him and through Him and in Him are all things … To Him be praise, honour, and glory, world without end. Amen.”

When nature is believed to have no preordained meaning or purpose in itself, the speculative interest in it fails, and the remaining concern is only to subdue its inherent purposelessness to our own chosen ends. Yet if, in their turn, these ends of ours are not themselves informed by faith, if they are merely chosen and not prescribed, if they represent only human preferences dictated by interest instead of solemn obligations emanating from a source beyond ourselves, then science becomes a desperately dangerous tool to put in men’s hands.

Baillie’s words should give us pause for thought about some of the sweeping claims that are made by some critics who blame Christianity for being the principal ideological fountainhead that has spurred on the exploitation of animals, and the degradation of eco-systems.

Richard S. Westfall (1986). “The Rise of Science and the Decline of Orthodox Christianity: A Study of Kepler, Descartes, and Newton.” in God & Nature: Historical Essays on the Encounter between Christianity and Science, David C. Lindberg and Ronald L. Numbers Eds. (Berkeley: University of California Press).