N.B. The following text in this blog-post Goldfinch: Symbol for Resurrection is Copyright © 2012 Philip Johnson.

In his original study of the Goldfinch in European art, the ornithologist Herbert Friedmann (1946:7-9) wrote that this bird has several symbolic meanings ascribed to it. The four principal symbolic meanings all link up to important biblical things including: the soul, sacrifice, death, and Resurrection. Another symbol that the Goldfinch stood for was recovery from illness, and the raising up of a person out of their sick-bed was another kind of symbolic Resurrection. 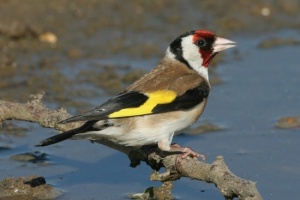 It was during the Renaissance, that the European Goldfinch (Genus: Carduelis; species Carduelis carduelis) became associated in paintings with important theological symbols such as the Passion of Christ and the Resurrection.How that came about involves a retrospective kind of tale about the Goldfinch  and the Passion of Christ. The legend endeavours to explain both the distinctive red markings on the Goldfinch’s head, and its diet of eating thistle and thorns. 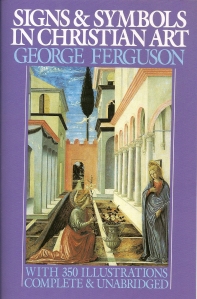 A post-biblical legend developed about the goldfinch being a witness to the humiliating march of Jesus carrying the cross to Golgotha. A goldfinch flew above the staggering figure of Jesus and was distressed by the crown of thorns on his head. As the legend tells it, the goldfinch flew down and tried to pluck off the thorns. As the bird plucked at thorns some of Jesus’ blood dripped onto the goldfinch’s head. Hence the origin of the red feathers on its head is explained as originating from this event.

Its natural diet of consuming thorns and thistles is also enlisted in the details of the tale, to emphasise that in the tragedy of Jesus’ torture and execution that even animals bore witness.

The goldfinch is fond of eating thistles and thorns, and since al thorny plants have been accepted as an allusion to Christ’s crown of thorns, the goldfinch has become an accepted symbol of the Passion of christ. In this sense, it frequently appears with the Christ Child, showing the close connection between the Incarnation and Passion. 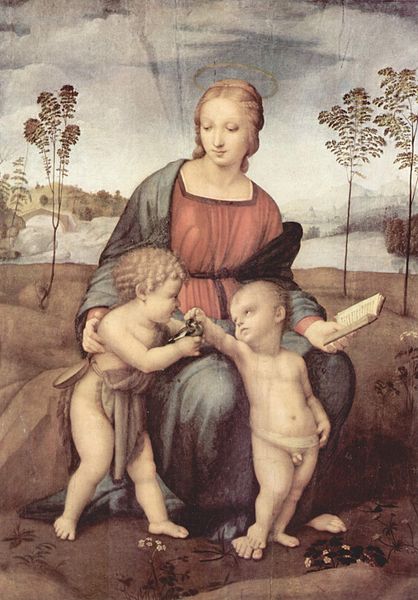 These two points about plucking the thorns and being stained in red blood became of interest to Renaissance painters.

On the Goldfinch as a symbol of the Resurrection, Friedmann (1946:7-8) states:

The goldfinch symbolizes Resurrection. This meaning is perhaps more intimately connected with the barn swallow than with any other single species of bird but is shared in by the goldfinch, the linnet, and by other forms as well. In the thirteenth and fourteenth centuries when interest in the apocryphal books of the Bible flourished so greatly, artists were quick to seize upon the aesthetic possibilities involved in the various legends thereby made known. One of these, the “Pseudo-Matthew Legend”, was that of the Christ Child playing with toy or clay birds which His companions brought to Him, and which He miraculously brought to life. This bringing to life quickly came to stand for the idea of Resurrection. The swallow, long considered as a sign of spring, of the rebirth of the year, was assumed to hibernate in the mud through the winter and then become revitalized with the advent of warm weather. The similarity between the idea of the dormant mud-encrusted swallow and the clay bird is obvious. Its connection with the Resurrection theme (and thereby with Christ) led to its being called in parts of Germany the “Madonna Bird”.

Sheridan Germann and Richard Rephanna (1995: 29) remark that the manufacture of the musical instrument the harpsichord in seventeenth century Holland involved it being decorated with symbols of the resurrection. This included the Goldfinch:

The goldfinch, often found as a resurrection symbol in vanitas still-life paintings occurred frequently on soundboards. Resurrection symbolism may have seemed particularly appropriate on musical instruments since the wood of the dead tree finds new life and voice in music. A motto sometimes found on musical instruments gave voice to this thought in the words ‘Dum vixi tacui, mortua dulce cano’ (in life I was silent; in death I sweetly sing).

As I will discuss in a future post, the symbolism of animals as signs of the Resurrection need to be seen as part of a wider stream of thought involving the future redemption and resurrection of animals (includes desert fathers and medieval saints signifying the peaceable kingdom in their contact with wild animals; reports of saints raising animals from the dead; and the fulfilment of prophecy concerning the new earth).