A FAITH EMBRACING ALL CREATURES, edited by Tripp York and Andy Alexis-Baker (Eugene, Oregon: Cascade Books 2012). This book, which was released just at the end of 2012, represents a handsome attempt by a variety of authors to address some biblical and theological questions concerning the role and status of non-human creatures. I am pleased to extend an endorsement to the editors, authors and publisher for bringing this book into print.

While I do not agree with every viewpoint expressed in the book, I believe that this text has an important place in the growing corpus of theological works addressing “animal theology”.  The book comprises fourteen chapters with contributions from some theologians and other scholars of repute in the field of animal theology including Carol J. Adams, Laura Hobgood-Oster, Stephen H. Webb, David Clough, John Berkman, Stephen R. L. Clark, and emerging voices such as the book’s co-editors. I will conduct a chapter-by-chapter review of this book in subsequent and sequential blog-posts.

N.B. The following text in this blog-post Animals and Prophecy: The Forgotten Contributions of G. H. Pember and George N. H. Peters (Part One) is Copyright © 2012 Philip Johnson.

The fulfilment of biblical prophecy about the new earth (Isaiah 65:17-25; 2 Peter 3:13; Revelation 21-22) is a theological subject that does concern animals. In different epochs of church history there have been theologians who have had no hesitation in affirming that animals are indeed redeemed and resurrected and included in the new earth.

In light of this distinguished “hall of fame” of theologians, philosophers, clergy and Christian apologists, Joseph Hamilton (1877: x-xi) stated:

Some of the ablest apologists for the Christian religion, have in many instances mooted, and in others confidently advocated, the future life of animals.

However, this topic is often treated in an uneven fashion in some contemporary theological works about animals. Similarly, some historians have either overlooked or under-emphasized this aspect of theology in their narratives about past Christian attitudes toward animals. 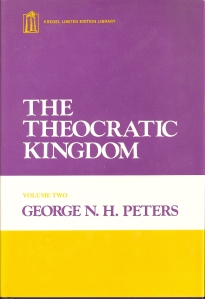 I propose to look at the forgotten contributions of two nineteenth century theologians who were contemporaries of each other: George Hawkins Pember (Brethren, England: 1836-1910) and George N. H. Peters (Lutheran, USA: 1825-1909). Before I look at their contributions I feel that a number of background points about the Bible, theology and church history should be made.

ANIMAL THEOLOGY: THE RESURRECTION IS THE LYNCHPIN

A comprehensive theology about animals needs to go beyond the doctrine of creation, and certain aspects of Christology — such as the crucifixion of Christ as a theodicy for animal suffering and also as a cosmic atonement. Some theologians also refer to the place of animals in the final consummation of all things (i.e. eschatology). Those who take up eschatology explore to what extent animals may be redeemed via the atonement. Some propose that animal redemption occurs as a form of divine compensation for the suffering that animals endure in this life. Others do not accept the divine compensation perspective but rather see the redemption of animals as arising out of an effect of the atonement.

David Clough’s On Animals: Volume One: Systematic Theology (London: T & T Clark, 2012) offers interesting food for thought. Clough develops an argument by exploring animals through the theological categories of creation, incarnation, atonement and redemption. His remarks about redemption reflects a positive and encouraging conviction about animals being resurrected. He also discusses the perspectives taken by John Hildrop and John Wesley regarding animal redemption. However, I will refrain from reviewing his book here and shall reserve that task for a separate post.

For the purpose of this post though I merely note that he has not referred to either Pember or Peters.

It can be legitimately argued that animal theology is a fairly recent and distinct category for serious and extensive reflection. As the horizons are wide and the discipline is in its infancy, theologians might be graciously excused for any omissions in their work to date. I am willing to accept that the discipline is in a pioneering phase and that colleagues in theology face a huge task in developing and deepening the field.

However, even allowing the pioneering theologians some “grace”, I perceive a serious and conspicuous “omission” in animal theology. The “great omission” is that the resurrection of Christ is either under-emphasized or not even mentioned. I believe this omission mirrors the paucity of works about resurrection theology generally.

The extent to which contemporary theologians in general take the resurrection for granted and fail to bring it to the foreground has drawn the critical ire of the Australian Roman Catholic theologian Anthony Kelly (2008: ix-x):

Our present hope in the face of all the challenges of life, suffering and death, is an effect of the resurrection. Unless that had happened, hope would be at best be a repressive optimism, or an accomodation to routine despair. But the effect of the resurrection is to see the world and to live in it otherwise … In fact it is so taken for granted that the originality of the resurrection’s effect on the life of faith can be forgotten. What originally made all the difference gradually becomes a remote presupposition, only vaguely affecting the way we understand God, ourselves and the world itself.

The resurrection is the central theme in all of the apostolic sermons included in the Acts of the Apostles. The message reiterated in Acts again and again is about the transformative power of the risen Christ. Atonement theology does not exist in the Acts sermons. When the Atonement and Justification are reflected on theologically, this occurs via the prism of Christ’s resurrection. So, the apostles’ interpretation is that the power and meaning of the cross derives from the resurrection.

Without the resurrection there would be no gospel message. It is the blunt point made by Paul: unless Christ has been raised then there is no forgiveness for sin (1 Corinthians 15: 12-19). If Christ’s story ends at the cross then this is mere religious martyrdom and there is no atonement.

It is curious that the place of the resurrection in its connection to the cross and atonement is not always given proper consideration. It is evident in Paul’s thinking that justification involves a seamless reality of cross and resurrection: hence he wrote that Christ was raised for our justification (Romans 4:25).

Resurrection as the Axle for Animal Theology

The resurrection supplies theologians with the vantage point from which to view everything — looking backwards to Genesis and forwards to the new earth.

Animal theology is incomplete without Christ’s resurrection because both the meaning and hope of creation’s redemption and the resurrection of animals are encompassed by it.

Christ being raised from the dead is described by the apostle Paul as the “first-fruits” of a future harvest (1 Corinthians 15: 20-23). Unless one is able to affirm the centrality of Christ’s resurrection in animal theology, then it is difficult to see how one can meaningfully sustain a theology about eschatology (let alone the inclusion of animals within that eschatology).

For more discussion on resurrection theology see Ross Clifford & Philip Johnson, The Cross Is Not Enough: Living as Witnesses to the Resurrection (Grand Rapids: Baker, 2012) and co-authors’ related book-blog.

Biblical passages that specifically foreshadow a renewed world when the reign of God is fully realised at the end of time include: the wolf and lamb are at peace with each other (Isaiah 11:6-9; Isaiah 65:17-25); the glorified city of Jerusalem “will be like villages without walls because of the multitude of people and animals in it” (Zechariah 2:4); the transformation of the groaning creation (Romans 8:17-22) involves the liberation of both righteous believers and all creatures; the New Jersualem is on a new earth and it is where God dwells forever with his people in a healed creation (Revelation 21-22).

Romans is suffused with resurrection. Squeeze this letter at any point, and resurrection spills out; hold it up to the light, and you can see Easter sparkling all the way through.

The release of creation from its bondage into a transformed creation hinges on Christ’s resurrection. Hiding in the general background out of which Paul wrote this passage was a whole tradition of extra-biblical Jewish thought about Noah and the Flood story. Proper discussion of Paul’s teaching though must be reserved for another post.

I will continue this discussion in some further posts and that will include examining animals and prophecy through the forgotten contributions of Pember and Peters.

I. Howard Marshall (2008). “Raised for our Justification: The Saving Significance of the Resurrection of Christ,” in Tough-Minded Christianity: Honoring the Legacy of John Warwick Montgomery, ed. William Dembski & Thomas Schirrmacher (Nashville: B & H Academic).